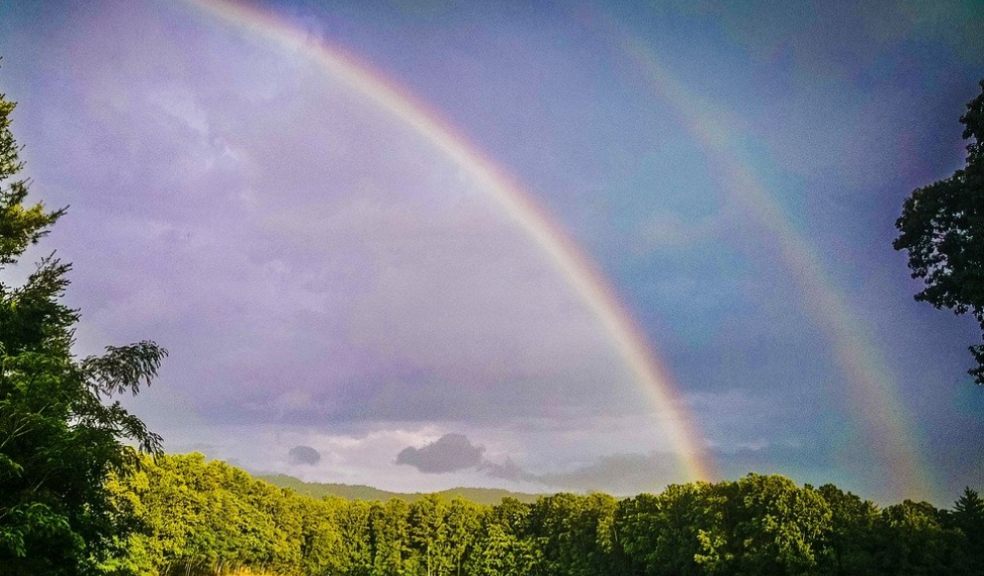 A symbol of hope, happiness and fortune, rainbows have been widely spoken about over the past few months with families creating rainbow pictures to show their thanks to the UK essential workers.

Not only have Brits been creating their own rainbows, but there have also been over 200 news articles sharing spectacular sightings of them during lockdown with people taking photos from their homes and gardens as a reminder that good things are on the horizon.

To form, rainbows require two essential elements: rain or mist in the air and sunlight. As well as this, places near altitude often experience rainbows as the air cools down coming from height and turning into rain.

To find where Brits can most often sight a rainbow from their homes, The French Bedroom Company researched into where the most reported rainbow sightings have been over the past few months, and combined sunshine hours, rainfall amount and landscape height to determine rainbow hotspots. As well as this, social activity was analysed tracking rainbow hashtags of over 1,000 posts.

At most, the UK gets on average 80 millimetres of rainfall a month and 197 hours of sunshine, but some areas exceed this and are situated in places with heightened land which makes the perfect combination for rainbows.

For the lucky residents of Leeds, rainbows are a common occurrence with over a quarter (28%) of UK reported rainbow sightings from here – making it the best place to spot them. The city can have up to 90 millimetres of rainfall in a month, and 190 hours of sunshine. Pair this with the surrounding Yorkshire Dales and it becomes the perfect spot for rainbows to form.

The end of a rainbow was spotted in Beeston just before a Clap for Carers at the end of April during lockdown where one resident described “I feel like I may be able to find the pot of gold, it seems so close”.

Although a common thought that a pot of gold can be found at the end of a rainbow, experts explain that you will not actually be able to ever find the end of a rainbow. This is because they are circular, but appear semi-circular as we can only see half on the horizon.

Despite this, many still believe that following a rainbow will result in finding a pot of treasure, an analogy that has filled Brits with hope during this time. Graphology expert Tracy Trussell explains “A rainbow is a universal signal of hope. It is a promise of better times to come.”

“At a time when society is being divided, this symbol innocently screams courage, solidarity and silent unity.”

Close to the sea and experiencing up to 190 millimetres of rainfall a month, Liverpool is in second place where just shy of one in ten rainbows are spotted (9%). Many Liverpudlians had the lucky experience of seeing a double rainbow at the beginning of March this year. This phenomenon occurs when sunlight is refracted twice within a raindrop.

Reaching as high as 3,000 foot in some places, The Lake District in the north-west of England has been the location for many beautiful rainbow sightings and is the third best place in the country to spot them. One hiker witnessed a rainbow in its full circle earlier this year when walking in Swirl How near Coniston.

West of the Peak District and close to the seaside towns of Litherland and Bootle, Manchester is the fourth best place to spot a rainbow in the UK with 9% of sightings here. The peaks of the nearby National Park combined with up to 190 millimetres of rainfall make it a great spot for rainbow formation. A double rainbow was spotted here at the beginning of May during a Clap for Carers tribute, a timely phenomenon which is designed to give thanks to key workers.

Experiencing up to 200 hours of sunshine and 200 millimetres of rainfall a month, the Islands around Scotland, in particular the Isle of Skye, are the fifth best place to spot rainbows in the UK. A full circle rainbow was posted at Macleod’s Maidens, an isolated spot on the Isle of Skye in the beginning of May. With just 3% of the country’s recorded rainbow sightings from here, it is thought due to its low population and rocky terrain, there are many more rainbows occurring that no one has been lucky enough to witness.

“Spotting something as stunning as a rainbow from your bedroom window can really uplift your mood. We recommend seeking them out when a period of rain has finished and the sun begins to shine; head to your window and see if you can spot one!”