Devon digital advertising agency, Launch Online, is supporting the FORCE Cancer Charity Autumn Bike Ride initiative this November, but rather than being out on the road, its staff will be pedalling their little socks off from underneath their desks.

With the help of a fleet of mini pedal exercisers, which fit underneath the desk, the team will pedal as far as they can over the four weeks of lockdown while they work.

Every week the leading cyclist will wear a yellow jersey, a nod to the tradition that exists in the Tour de France where the best rider is recognised by wearing a distinctive yellow cycling top.

On December 2, the team will collect the money raised and donate to the FORCE Cancer Charity, based in Exeter.

Jaye Cowle, founder of Launch Online said that it was important to keep the team active during lockdown; “Although this is a really fun initiative, there is a serious element here around keeping people active while many of us are spending so much time at our desks this year. The fact that we can support FORCE, a charity very close to my heart, is the icing on the cake.”

Sarah Daniels, Head of Income Generation for FORCE said: “FORCE is always trying to come up with new and innovative ways for people to support us – and we thought putting out all our old Autumn bike rides would inspire people to get out and pedal. Jaye and her team have far excelled anything we thought possible and we simply love their idea of peddling under their desks. We cannot thank Launch enough and for all who will be involved in creating this fantastic initiative for people to support FORCE – especially during lockdown – the sequel…. We hope others might look at this opportunity and roll this idea out far and wide – it’s certainly got legs!”

Force Cancer Charity is an Exeter based cancer support charity. This year is its 10th anniversary of the charity’s Autumn Bike Ride fundraiser. Although it can’t run these popular events this Autumn due to Covid, they are encouraging people to cycle any way they can to raise funds. 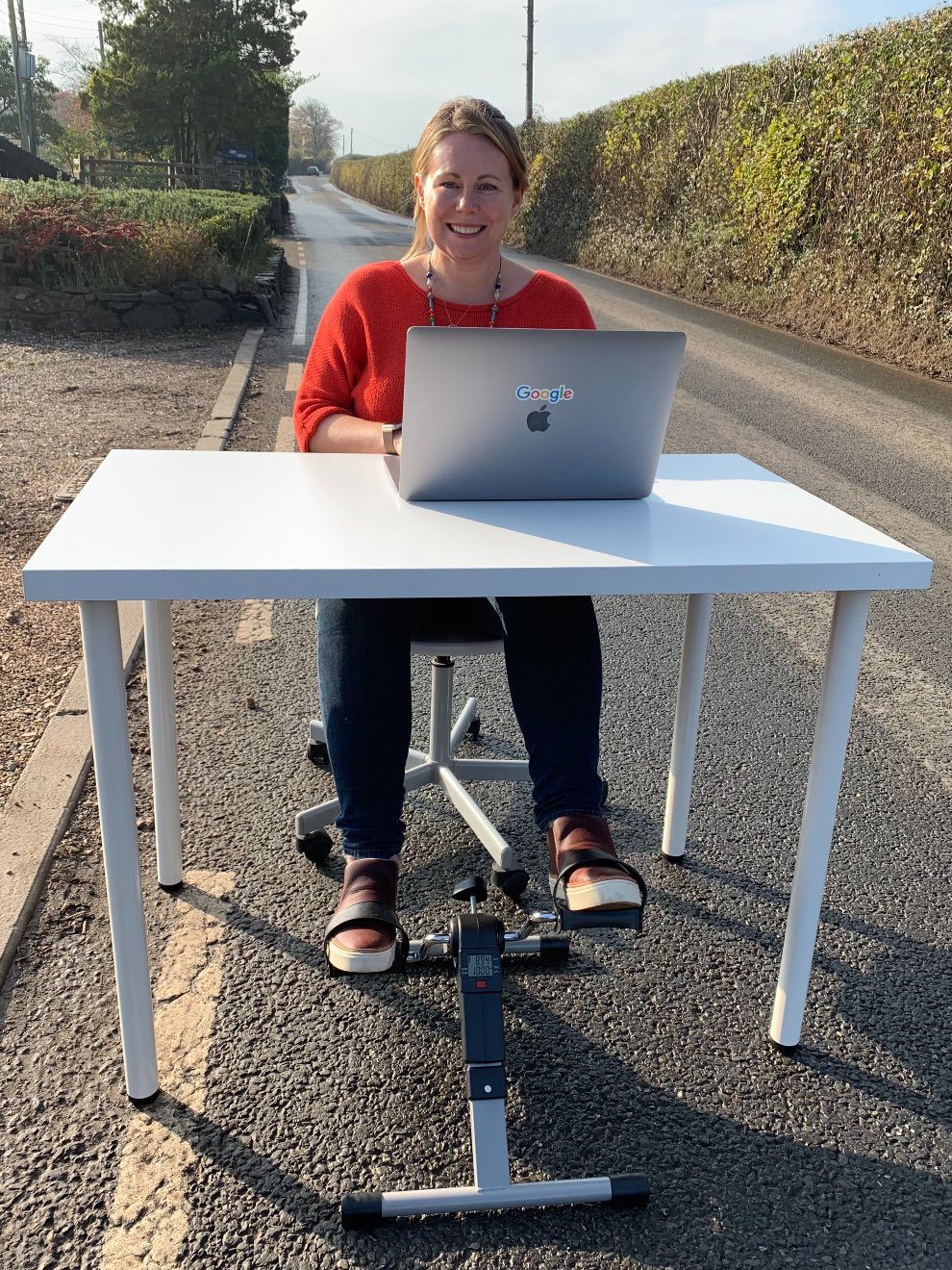 Quality and value, and not cost savings, remain the two biggest factors for businesses, when looking for a new supplier. The Facing the Future survey, conducted by Exeter based procurement consultancy BCR Associates, canvassed the opinion of  South West businesses from a variety of sectors, including manufacturing, professional services and construction. The survey provides a snapshot of how Covid-19 has impacted the supply chain. In the survey, participants were asked to share their supply chain challenges, priorities and predictions. Steve Bolt, Director for BCR, comments: “None of the businesses chose ‘the cheapest’, as a reason for supplier selection, and when asked to predict the key trends for 2021, cost over quality scored just 13%.” “It’s good to see that quality and value continue to drive procurement decisions, despite a tough 2020 and the ongoing economic uncertainty.” Steve explains: “The pandemic may have refocused businesses’ priorities, when it comes to choosing a supplier, and this could be because some have felt let down by certain suppliers.” Regarding the impact of Covid on the supply chain, the survey uncovers the issues businesses faced, as suppliers transitioned to remote working. 53% said reliability of service had marginally declined, while 51% noted a marginal decline in communication with suppliers. One respondent commented “the main issue has been, and continues to be, just getting in touch with the right person.” Steve Bolt says that even BCR, with their direct line into suppliers, noticed some disruption. Promisingly, however, survey respondents found only a marginal decline in service, with one business leader commenting “people have demonstrated human values: patience, flexibility and a willingness to explore creative solutions to problems.” When asked about the priorities for supplier selection, the top answers were as follows: Value for money Quality of service/ products Good reputation in the marketplace
Steve says: “Sustainability also scores highly, with a third of businesses claiming it is a key priority, but right now a lot of supply chain decisions are still driven by value, quality and reputation, with sustainability considerations underpinning these ‘cornerstones’ of a great procurement strategy.” Looking to the future, Steve comments: “When asked about the key trends for 2021, given the economic uncertainty we are currently facing, I’m surprised that just 40% of businesses chose volatility in the market.” “At BCR, we predict this will continue to be…

Accident and Breakdown Policies Procedure indicates that the police must be informed at the time of having an accident while driving a Dubai rental car, especially if the rental vehicle has been damaged. At the same time, it is also advisable to inform the company that they have arranged the car rental so that they take care of the matter. It is important to follow this procedure since otherwise you will have to pay for the damages, even if it was not your fault. Likewise, if the rental car does not work correctly or has a deficiency, we recommend cheapest monthly rent a car in Dubai and informing the company that manages the rental so that it can solve it. Failure to do so could cause the company to charge you for damage to the vehicle. As we have indicated above, practically all of the car rental providers that we have available in our rental car search engine include damage coverage for the bodywork within the standard rate. Policy Regarding Traffic Fines Any traffic fine that falls on the rental vehicle will be deducted from the deposit that was left when signing the contract with the car rental company. Since traffic tickets are sometimes generated several days after the incident is registered/reported by the RTA (Roads & Transport Authority), car rental companies often use the amount that is left as a deposit as a security. Dubai’s electronic toll collection system that allows you to drive through Dubai without having to stop, to manage the most widespread traffic fines in Dubai and is in charge of making the charges. Charges for additional extras If you take a look at car rental prices in Dubai through our car rental comparator you will see that the price increases depending on the range of the rental vehicle you choose. On the other hand, if you also want or need to add extras such as adding an additional driver, adding a navigator (although most cars already have integrated GPS), hiring a baby or toddler chair, the rental cost will increase. Pay attention to the Terms and Conditions It is a common thing not to read the terms and conditions carefully before renting a car. And not doing so can lead to unnecessary additional costs and problems during your Dubai vacation. That is why it is important that you read the…

Small community-based businesses locally will be given the opportunity to be crowned champion of their town or the whole of Devon in 2021 following the launch of an exciting awards programme. The Town & County Business Champions 2021 awards have been launched to highlight the achievements of the UK’s very best micro and small businesses who are keeping community spirit alive in their local area. The awards are aimed at any businesses with up to 50 employees, including hairdressers, cafes, accountants, solicitors and graphic designers. Awards director Damian Cummins said: “This year, more than ever, we have learned to appreciate our local independent businesses. From the local corner shop to barbers, pubs and cafes. “Lots of these small businesses are put off by business awards as they feel they are too small to compete. We wanted to create an awards ceremony that recognised and celebrated the very best of local businesses, from the High Streets to those hidden away in the nooks and crannies of towns and villages. “The Devon Business Champions are all about the story. We want to know why you are the best in your area and how you support the local community. From being the latest craze or ‘go to’ restaurant in your town, to the family business that’s been going quietly for generations. “These are truly local, transparent awards, celebrating local success stories and are incredibly easy to enter. Just reaching the finals alone will help companies to successfully market their business and thrive.” The awards opened today and will culminate with five regional finals in Northern Ireland, Scotland, Wales, Northern England and Southern England. The regional finals will produce champions at both town and county levels and businesses will only be in competition with other firms from their area. For more information, or to enter the awards, visit www.townandcountybusinesschampions.co.uk or www.tcbchamps.co.uk The Exeter Daily…

Foxcombe Bakehouse has launched a new ‘Cake in a Box’  postage ready line  to support its independent retailers and to capture a market share of the Click and Collect and Click 2 Order shoppers at home or at work. The initial launch range is a seasonal selection of cakes and bakes, including mince pies, short breads and traditional rich iced fruitcakes. The selection boxes which start from £4.95 RRP can be ordered direct via independent retailers or mail order from Foxcombe Bakehouse. The Cake in a Box arrives beautifully packed at the retailer, ready for customers to collect or mail-on as a gift for a loved one.  The new mail order side of the business delivers direct to customers’ afternoon tea tables and increasingly, work-from-home desks.  Foxcombe Bakehouse is based just outside Okehampton, owner Helen Spooncer explains, “We have received unexpected demand from businesses wanting to treat their staff working from home, clients and customers, as face-to-face visits have ceased during lockdown. One customer ordered surprise afternoon tea treat boxes for all its staff with strict instructions the boxes could not be opened until a staff zoom meeting!” “The concept benefits our stockists, in particular local post office shops and the older generation customer who may not have internet access and have been relying increasingly on their local convenience stores. The mail order operation direct to customers is a first for us, and we are hoping to capture a slice of the Christmas and business gifts market”. The multi award-winning bakery, was started by Helen in 1998 originally from her kitchen table as she baked cakes to sell at the local pannier market. The business now employs eight and has grown to supply over 150 mainly independent retailers – convenience stores, farm shops, garden centres, and tourist attractions across Devon, the South West and beyond. The Exeter Daily…

Cygnet Theatre will be celebrating its 40th anniversary in 2021 with a special season of work running from May to July. They are looking professional companies who may like to take part in the season by bringing a show, concert, or event. The piece of work or the group would need to have some connection with Cygnet, but that can be as creative a connection as you like! They already have several shows, workshops and Q&A sessions lined up with special guests and are planning to use multiple spaces in the city as well as their own building.   Submissions are also invited from local community groups who would like to take part in specially dedicated community and charity days during the season. Cygnet Theatre hope as many groups as possible would like to be involved, so do get in touch with any thoughts or ideas. Cygnet is also looking for any technical/backstage/marketing volunteers who may be able to support their season. To get involved please contact programming@cygnettheatre.co.uk or phone 01392 277189 and ask to speak to Louisa. The Exeter Daily…